On 25 June 1731, a group of visionaries and patriots met for the first time and formed the Royal Dublin Society, RDS. They were thinkers who believed in the power of ideas, and of turning these ideas into action.  Their assignment was to put ideas into actions that could transform Ireland by creating a vibrant, thriving economy and culture.

For around 300 years, the RDS has responded to Ireland’s priorities and needs, addressing gaps in the evolution of our economy and culture that have shaped the nation. The RDS organized the planting of 55 million trees to produce timber and make better use of their land.

By 1877, the Royal Dublin Society had developed or created four cultural institutions to encourage artists and showcase the best of Iris culture and arts: The National Museum of Ireland, The National Library, The National Gallery, and NCAD. Recognizing the Irish horse’s potential, the motorcar of the era, the RDS launched a Horse Show in the 1860s. The show continues to display the best sport horses in the nation and to promote best practices inbreeding.

Many committed visionary individuals have sat around the RDS table and have made a significant impact on Irish life; Walter Wade, who had been the brainchild and founder of our National Botanical Gardens; Edward Stanley, who had the idea of an occasion to showcase Irish production to boost employment opportunities in Ireland; William Wiley and Edward Bohane who had been pivotal in building the effect of the Dublin Horse Show and Spring Show to showcase best practice to farmers across Ireland and improve the profile of Irish creatures in overseas markets. RDS Members who have led that have contributed their energy to the mission of the RDS’s listing is long. And they’ve been a part of a collective effort which has contributed to Ireland back over generations.

Thomas Prior, along with the founding members gathered around him, thought from the beginning that using a base to nurture ideas and to research, discuss and make plans, was critical to the level of impact they could attain. Wherever they landed, the RDS Members have made an energetic, inspiring, visionary foundation. From accommodations in Trinity College Dublin in 1731 to Leinster House in 1814, they handed over to the Irish authorities in 1923 and to Ballsbridge. In Ballsbridge, different approaches had a place to grow. Events and dialogue could happen in beautiful surroundings, a concert hall for music, a library to preserve historical books and papers, iconic halls to showcase business and a fine sporting stadium that are already famous within European rugby and home to one of the greatest equestrian events in the planet.

Throughout its history, the RDS has earned momentum and scale to significant issues that underpin Ireland’s culture and economy, and it proceeds to do so today.

Agriculture has been a determined theme of the RDS from the beginning of its foundation. In its initial eighteen months, the Society reprinted or published up-to-date material on the latest agricultural innovations, such as Jethro Tull’s publication on Tillage, a paper’ on the advancement of flax altering the soil’ and’ a new way of draining boggy and marshy lands. The Society followed this in the year to come up with further publications on saffron planting, hops, grass cultivation, drainage, bee management, wool production, and tillage. They also held presentations on how to use newly created farm machinery. 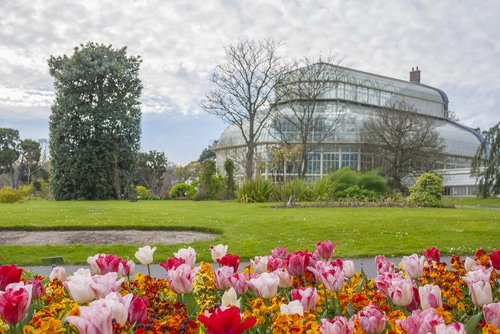 Forestry was encouraged from an equally early phase with records from the Society showing that premiums have been increasingly awarded for afforestation since 1742 onwards. From 1766 to 1806, more than 55 million trees were grown in Ireland based on the Society’s leadership.

The history of Botanic Gardens can be discovered in the time books of the Royal Dublin Society 1732. After this time, the Dublin Society sporadically leased property to conduct botanic and agricultural experiments and initiatives. In 1790, enabled by investment from the Irish Parliament, the Society leased property in Glasnevin to produce the lands prepared for providing public education on botany. It hired a professor of Botany to oversee the gardens along with an expert head gardener from Scotland. With the completion of offices and green homes in 1799, the Botanic Gardens, Dublin, was opened in 1800 and remained in the maintenance of the Society before 1877, when they had been moved over to the State.

In 1845 the first signs of potato blight that goes on to have a devastating impact on Ireland were found by the RDS in the Botanic Gardens. The Society provided a prize of 20 Euros for the best research on the poorly understood disease. Implementing knowledge of science and agriculture, the Society led its scientists to discover solutions. However, despite numerous trials and experiments in the Botanic Gardens and at the Society’s lab in Leinster House, they had been unable to find one.

The first Spring Show was executed in April 1831 on the lands of Leinster House, Kildare Street, the objective of which was to encourage best breeding practices in livestock by showcasing the very best in the nation. By 1848 the Juris of the show were satisfied that English breeders would shortly be buying Irish inventory, such as the quality of cattle breeding on display. Their optimism was validated in 1856 in the Paris International Cattle Show, where Irish Shorthorn cows took more prizes in proportion to livestock showed than their English and Scottish counterparts combined. The Spring Show moved into the RDS territories of Ballsbridge in 1881 and proceeded it there before the previous Spring Show took place in 1992.

The association with agriculture continues now, and it forms a significant part of the Society’s purpose. The RDS Forestry and Woodland Awards are awarded yearly since 1988. In 2016 the RDS, along with the IIEA, outlined the framework of a’Climate Smart Agriculture’ program for Ireland. The Society remains to award yearly awards for Ireland’s best cattle, such as the EBI (Economic Breeding Index) dairy cow.

Arts was among the original areas of focus for the Society as it was initially founded.

The Royal Dublin Society started its drawing school in 1750 and had a historical emphasis on figure drawing, landscape, and ornament, with architectural drawing included in the 1760s. Tuition was free and famous among people of a vast array of backgrounds and trades. A prominent student was James Hoban, who attended school in the 1780s and went on to design the White House.

Later on. The RDS Art School became the Dublin Metropolitan School of Art, before turning into the National College of Art and Design.

The yearly RDS Visual Art awards include the RDS Taylor Art Award, which has been bestowed since 1878. This award is currently valued at $10,000 and is available to Irish visual art scholars.

The RDS Association with classical music reaches back to 1886 when it initially organized a series of famous recitals and included works by Corelli, Haydn, and Beethoven. They were performed by the teaching staff of the Royal Irish Academy of Music.

The RDS turned out to be the main venue from 1983 onward for Feis Ceoil. In 2003 proposed its primary RDS Music Bursary of $10,000 to one of the champions of chosen Feis Ceoil senior contests. The RDS Music Bursary now offers two prizes, one of $15,000 and the RDS Jago Award of $5,000. Popular past winners include Máire Carroll, Patrick Rafter, and Anna Devin.

The first National Horse Show was accommodated in Dublin in Leinster House on April 16-17th, 1864. The event was combinedly organized by the Royal Agricultural Society of Ireland and the RDS.

In 1866 the RDS analyzed the probability of conducting a separate Horse Show, and the first RDS-managed Horse Show was hosted in 1868.

A jumping contest was featured that same year. It was won by a sheep breeder from Co. Roscommon, Richard Flynn, with his gelding Shaun Rhue.

In 1879 the RDS granted land from the Earl of Pembroke in Ballsbridge. They organized their first Horse Show there in 1881. The RDS Main Hall, previously called the Agricultural Hall, was moved from the RDS headquarters of Leinster House, and a stadium was constructed to manage a strength of 2000 people.

With the potential of the Ballsbridge site, the Royal Dublin Society started more show classes and jumping competitions. The transfer of this Industries Hall from Leinster House in the 1880s saw the introduction of an exhibition room to house the RDS craft and art competitions.

When the show returned after WWI, women were allowed to compete in their own jumping contest for the first time. By the next year, they were competing in all classes against the guys, but the Thursday of the show, once the first Ladies Competition was held in 1919, is celebrated as Ladies Day.

Switzerland won that first contest. The first Irish win was in 1928. Ireland has gone on to hoist the Aga Khan trophy 20 times, winning it completely in 1937 and 1979.

Today more than 1,500 horses arrive yearly at Ballsbridge to get involved in the Dublin Horse Show, continuing its well-deserved reputation among the world’s top equestrian events. It’s the pinnacle event for a business that has an economic impact of over €800 million, and it’s also a vibrant social event for people across the nation.

In the early period of this Society, science has been linked to agriculture and business. A link that lasted well into the nineteenth century; for example, the Botanic Gardens had appealed to agriculture and science, as did the public lectures in veterinary science. But science started to also carve out its own individual area of choices towards the ultimate end of the nineteenth century with professorships in physics and chemistry financed by the Society at the 1790s, the hiring of an itinerant geologist who visited Ireland collecting specimens for the Society, and the acquired of this Leskean Cabinet of minerals in 1792.

The Royal Dublin Society started science lectures covering a range of subjects in 1797, with lectures on chemistry and mathematics made open to the public in 1824. In 1810 a big laboratory and lecture room were constructed at Hawkins House. A similar facility was built in Leinster House when the Society moved there, letting the public lectures on science to proceed (in what is now the Dáil Chamber at the Houses of the Oireachtas).

In 1835 the RDS co-organized the British Association for the Advancement of Science, which it did in 1957, and from 1838 started science lectures outside of Dublin.

In 1903 the Society carried radium into Ireland for the first time. Through experimental techniques, invented by RDS Members John Joly and Walter Stevenson, among the first forms of cancer treatment, was created to much overseas acclaim. It subsequently became known as the ‘Dublin method.’ The Society established the Radium Institute to provide radon to hospitals, a function is carried out till the Irish Radiological Institute was founded in 1952.

In 1961 the RDS organized its first exhibition on atomic energy, which was followed up in 1963 and 1966, garnering audiences of more than 30,000. The Young Scientists and Technology Exhibition was launched by physicists Tony Scott and Tom Burke and, the latter being a part of the RDS Science Committee. The exhibition was held in 1966 in the RDS.

The RDS promoted science in Ireland by awarding the Boyle Medal on a biennial basis, shifting between a scientist in Ireland and an Irish scientist based abroad. The Boyle Medal was awarded since 1899 and is the most prestigious scientific honor of Ireland.

The RDS Primary Science Fair supported primary school classes to explore science hypotheses and from 2017 worked in three cities around Ireland, with over 7,000 participating children across all three venues. The RDS Primary Science Fair was mentioned as a positive example of informal science awareness by the Government-authorized ‘STEM Education in the Irish School System.’ In 2019 the RDS developed ESB, and Science Blast came on board as title sponsors.

Science Blast was invented, developed and delivered by the RDS. In its first year, it had more than 10,000 school students participated in STEM learning.